Mount Rinjani is among the tallest mountains in the world. It’s also one of the most beautiful ones, thanks to the incredible nature of Indonesia. You can check my extensive review on this website, but today our focus is on a different landmark – the Segara Anak Lake. It’s pretty huge and will instantly take your breath away. Just take a look at the picture: isn’t it absolutely amazing?

The birds singing in the air, the sun rising early in the morning, and the smell of fresh water will thrill and excite you even more once you find yourself standing right in front of it. While the mountain is the obvious “king of the jungle”, this lake is just as wonderful, to say the least.

Even though I’ve been to Lombok more than once, this island keeps reminding me that there’s still a lot to see and to experience. The Segara Anak Lake is not nearly as popular as Rinjani, but it is getting there, thanks to the tours that include stops at the twin waterfalls (Tiu Kelep and Sengang Gile), the three caves right underneath the mountain, and, of course, this place.

The best thing about tours like that is the fact that the tourists get to see it all in one day. But one doesn’t really need expensive tours and guides to show him/her the best parts of the island. Tiu Kelep might be a bit tricky to find because it’s 30 minutes away from the entrance; the lake, in turn, is too big to miss it.

What Is The Segara Anak Lake All About?

So, what’s so special about this lake? First of all, during the high season, you’ll find a lot of foreigners and locals gathering around with their families. It’s a place that brings people together, and their lovely camps look breath-taking when the sun goes down. Just imagine sitting there by the Segara Anak Lake with your buddies and enjoying the cold breeze, the delicious local meals, and the feeling of being surrounded by friends.

The Mount Rinjani National Park is a beautiful place, and this lake is a huge part of that beauty. Despite the fact that it’s always crowded, the government is trying to keep it clean and civilized. My friends told me that it used to be worse back in the day.

Keep in mind, however, that the further away you move from the lake, the more trash you’ll find. Naturally, it ruins the mood; the locals aren’t really bothered with it that much, though. A quick tip: if you can’t stand beer cans, bags, napkins, and everything else in between near your tent, I’d highly recommend checking out some of the least populated beaches.

They’re usually the cleanest ones (go through my reviews to find just the perfect one). Still, if you’re planning on joining a group and trekking your way up to the mountain, this lake will be a perfect place for camping. Spend the night there and be on your way early in the morning while the sun is still sleeping.

Rinjani is a gigantic mountain, and over the years, the lava coming down from up there formed caves, lakes, and fields full of flowers. That’s right – if you take a good look around, you’ll see that the area is quite diverse, and while, say, the left side of the Segara Anak Lake is covered in stones, the right side is full of bushes, flowers, and trees.

The springs are a bit further away, but if you want to relax and let your legs rest after a day of walking, they will be just what you need. Please keep in mind that Indonesia is a very conservative country, and the Sasak people of Lombok don’t really like the provoking tourists. Yes, I’m talking about the ladies in bikinis and the fellas without their shirts.

While in Europe and America that’s a normal thing, out there, you’ll get those disapproving looks. It’s not against the law or anything like that; yet, if you want to be respectful towards these people, make sure to put at least some clothes on when you’re near the springs.

Watch out for Mount Baru Jani that’s located a few hundred meters away from the lake. It looks pretty scary and might just erupt and cover the entire area in smoke. It was a bit unsettling at first, but the locals ensured me that the predictions are almost always right, and I wasn’t in any danger – they turned out to be were right!

What Is There To Do At The Spot?

People go to the lake to fish, even though it is permitted (same goes for swimming). I have to say that fishing is a very popular activity in Lombok. Some people just use it to have a good time with their friends; for others, it’s the only source of income. The views near the lake have a calming effect.

It’s almost like nature knew exactly where to put it (and the hot springs) so that the climbers could have a place to stay before going further up to the mountain. Segara Anak is pretty big – take a look at it on the map below. At the same time, it’s very cozy and intimate.

You can make new friends, find out exciting things about the local culture, and just have a break from all the craziness that’s going on in your regular life. And since Indonesia is a third-world country, the prices here are pretty low, which allows tourists on a budget to enjoy everything it has to offer.

Obviously, there are some 5-star hotels and restaurants that will cost you a fortune, but you’ll never have a problem finding some decent spots to stay in and some affordable-yet-nice cafes/warungs that serve delicious meals. Lombok is happy to welcome people of every nationality, race, and creed.

Some Interesting Facts About The Lake

Alright, so, this is a crater lake that formed many centuries ago after a gigantic volcano eruption. In Sasak, Segara Anak means something like “the child of the sea.” The temperature of Segara is in the 20-22 degrees Celsius range. That’s actually significantly higher than the average temperature for a lake. It’s possible thanks to the so-called “gas bubbles” that are constantly warming it up.

As for the surface, it is 2,4K meters above sea level. With dimensions of approximately 7,5 x 6 km and a depth of 230 meters, this is quite an impressive work of Mother Nature. When you get closer to this landmark, the smell of sulfur will “hit” your head.

For the locals, this is a sacred place and carries a strong religious value. People from all over the world visit Segara Anak hoping to get purified and start fresh. There are no food stalls or bungalows in the vicinity, but you will find some public facilities at the entrance to the National Park. Again, since this is one of the most popular tourist magnets on the entire island, the folks running it are doing everything in their power to make it worth our while.

If you’re traveling with a group (yes, I’m talking about professional guides), they’ll probably have all the necessary camping stuff, including some snacks. But it would be a good idea to pack your own food and water, as you never know what’s around the corner, especially in a foreign place like Lombok.

How To Find The Segara Anak Lake

Even though it is located pretty far from the center and the capital, the fact that Mount Rinjani is an incredibly popular tourist destination means you won’t have any problems with the roads. At the same time, you gotta get yourself ready for one of the longest rides in your life. The shortest and the most traffic-heavy route will take 3 hours and 30 minutes.

The good news is – that will allow you to see the better half of Lombok, turning an otherwise exhausting drive into another tiny adventure. The taxi drivers will charge a lot for a ride that long; if you’ve got some bargaining skills, don’t hesitate to put them to good use.

The longest route is along the Senggigi Beach and the entire north-western shore of the island. It will take +/- 4 hours. People that landed at the Lombok airport will have to spend roughly the same amount of time on the road. If you’re all about that “raw” experience, try using public transport to get there.

It will be tricky, though, and also hot, cramped, and frustrating. Personally, I always rent a bike. You are free to choose between a car, a bike, a taxi, and a public bus. 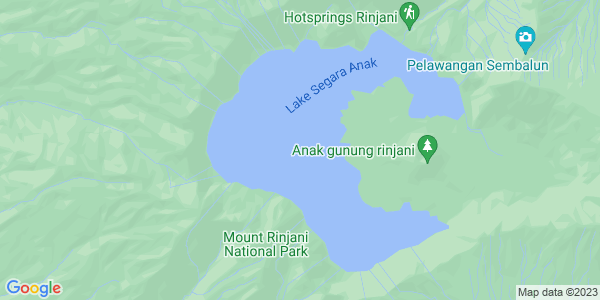 Kameron S.
March 10, 2018
The lake wasn't trashy, just like you said, but the camps in the forest were not that clean. Definitely a big turn-off.
Reply
Christina S.
October 3, 2017
It might be a challenge to climb all the way up, but definitely worth it, especially if you're a part of a group.
Reply
Nadia P.
February 17, 2017
Mount Rinjani and Segara Anak have a sacred connection. Make sure to visit both while you're in Lombok.
Reply
Emery J.
May 9, 2016
To me, Segara Anak is a special place. The memories we made there will be with me forever!
Reply
Kyleigh R.
March 16, 2015
It's actually dangerous to swim in that lake - that's why it's off limits. However, some of the locals do swim and fish there.
Reply