Probably the greatest thing about the waterfalls in Lombok is the fact that most of them are located above sea level. That means you’ll get to breathe in the fresh air up in the mountains and admire the island from the top. Same goes for the Geripak Waterfall. While it’s not the highest one, you’ll find it at an altitude of approximately 500 meters, which is still pretty awesome.

The fans of nature will probably pick a route through the Dopang village. That way, they will get to see the beauty of Lombok with their own eyes and get to learn more about the regular men and women. If you’ve got the time and the energy, it would be a good idea to follow their example.

On your way, you’ll see wonderful beaches, rice fields, and everything else in between. I always like to say that the journey towards a certain landmark can be just as exciting and rewarding. The water in Geripak is clean, clear, and magical, according to the locals. In fact, any source of water that originates high in the mountains is considered to be sacred by the citizens of Lombok.

The waterfall is quite impressive and is equally great for swimming, bathing, messing around with your friends, and just sitting on the rocks and admiring the view. While this isn’t the most popular spot on the island, it still is known to the tourists and won’t be completely empty.

What Is The Geripak Waterfall All About?

It’s safe to say that if you love mountainous areas, lush, beautiful forests, and marvelous waterfalls, then Geripak is exactly what you’re looking for. We all want to rest after a hard day at work, and this spot will definitely take all the stress away. Modern-day middle-class folks can’t really afford frequent trips to foreign countries; but when they do hop on a plane, these people want to get the most out of a journey to an island like Lombok.

Are you one of those hard workers that prefer peace and tranquility over fun and crowded landmarks? Well, then you’ll fall in love with the special atmosphere around the Geripak waterfall.

It’s got a magical touch and will refill your body and soul with enough energy to last until the end of the year (or untill the next trip). The exact address is Guntur Macan, Gunung Sari sub-district, West Lombok, West Nusa Tenggara province. Even though it’s not the most popular place on the island, there’s no shortage of vendors selling snacks, drinks, towels, and some other useful stuff.

Everything is cheap and you’ll be able to buy a ton of stuff for just 5 dollars. Yes, compared to the Europeans and the Americans, the citizens of Indonesia aren’t that wealthy (and the prices are low). That’s an obvious plus for this country and one of the biggest “magnets” for the potential clients.

Keep in mind, however, that there’s a lot of climbing involved, and it’s not that easy to conquer those steep rocks. Besides, the path is slippery, especially after it rains. For that reason, I strongly recommend grabbing a nice pair of shoes (sneakers, maybe) instead of flip flops or whatever the locals wear. It is very important, as those rocks can be quite dangerous.

Obviously, the fact that the Geripak waterfall is located only 0, 5 hours away from Mataram, the capital, means that you won’t have a problem with finding a decent pair of proper shoes in the vicinity. Besides, there are more hotels and guest houses to choose from than you could ever imagine.

Same goes for the restaurants, cafes, and warungs. Again, this is the capital and the biggest city in Lombok. At the same time, the fact that it’s huge means you might end up spending the better half of your day searching for the best pair circling through the countless stores. Fact: Mataram is quite expensive (compared to the rest of the island, of course).

Furthermore, it’s full of annoying vendors and guides that will quite literally stand in front of the tourists in order to make them use their services. Thankfully, there’s nothing hard about finding the Geripak waterfall and you won’t need the help of those people. ATMs, banks, embassies – you’ll find it all there.

What Is There To Do At This Landmark?

The first thing you need to understand about this place is that it’s a tourist area with a solid infrastructure and relatively new, paved roads. In contrast to the beaches in the far corners, Geripak is, again, very close to Mataram, which makes it one of the most “comfortable” landmarks on the island: you won’t even have to go very far from the city to check it out.

And, even though the tourists aren’t the biggest fans of this spot, the locals love and cherish it like the most popular waterfalls. The distance is approximately 15 kilometers. Guntur Macan, the village, is famous for the fascinating hand-made bamboo items. Make sure to buy some for friends and family back home.

The path is full of palm-trees; the locals use their juice to make brown sugar. Now, despite the fact that the roads are nice and new, the waterfall is still located in a preserved forest, meaning the tourists will have to walk for about 1-2 kilometers before they reach Geripak. It would be best to rent a 4×4 vehicle or motorbike.

As for the walking part, get yourself ready for a nice stretch for the legs. With that said, it would be best not to stuff your bag with tons of unnecessary stuff. Only take the most important things (a change of clothes, some towels, and maybe also a mat). Snacks and drinks can be bought at the food stalls, just like I mentioned earlier.

The road from the parking lot to the landmark will give you a chance to see what Lombok’s nature is all about. You’ll come across bamboo, palm, and even durian trees. Plus, there are all kinds of plants in the forest, and they all deserve a selfie. The waterfall itself is pretty high (25 meters) and the rocky terrain only makes it look more natural and attractive.

Despite the fact that it’s located relatively close to the main road, no sounds will disturb your peace near the Geripak waterfall. The singing of the birds and the sounds of the water hitting the rocks will only add to the overall atmosphere. There’s also a pool right next to the waterfall (approximately 10 x 5m).

Feel free to dive right in and enjoy the refreshing water. It might be a bit cold, though, especially during the rainy season and late at night. That’s exactly why I recommended taking some dry clothes with you. Usually, during the holidays and the weekends, this spot is full of locals that come from every corner of Lombok and the entire country.

As mentioned earlier, the foreigners don’t really know this place that well; but the government is doing a lot to make sure landmarks like Geripak get more recognition. If Senggigi is too noisy, Mataram is too busy, and Kuta is on the other side of the map, this waterfall will be a great alternative, that’s for sure.

How To Find The Geripak Waterfall

I said in the beginning that this landmark is not very far away from the big city. From Mataram, it will take you less than 30 minutes to reach the parking lot. From there, you’ll need to walk for about 15 minutes to get to the spot. This is an ordinary thing on this island, by the way, and if you’re a regular, this fact won’t be a surprise.

From the Lombok International Airport, the ride will take 1 hour and 15/20 minutes. The road is mostly straight, but the tourists are free to choose between two available routes once they enter the city. The fastest route lies across the western part of the city; the slower route lies through the central part.

Most of the time, the shortest routes are “overcrowded” and traffic is bad. So, it might be wise to choose the second route knowing that you will definitely get there on time. If you’re full of energy, go ahead and rent a car/bike at the airport. Renting in Lombok is very popular and affordable.

At the same time, if jetlag is killing you, hire a taxi driver and let him worry about getting you there. Public transportation is the third option. Buses head towards Mataram on a regular basis, but they’re usually too noisy, hot, and crowded for comfort. 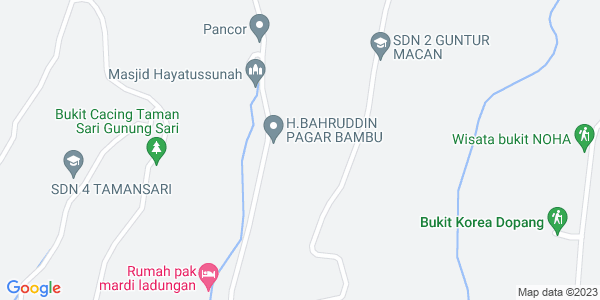 Adelyn P.
February 11, 2018
I never heard about this waterfall before. It's great to have a spot like that next to Mataram - don't even have to worry about the hotel anymore!
Reply
Madilyn L.
April 28, 2017
Ampenan and pretty much the entire city is marvelous. But Geripak is even more exciting.
Reply
Derrick C.
October 4, 2016
We actually took a bus from the airport to Mataram. Then, we used a bike to get to Geripak and walked for 10 minutes to the fall.
Reply
Jazmin J.
September 12, 2016
When we arrived there, the sun was shining, and the road wasn't slippery. The waterfall, however, is quite average.
Reply
Cruz N.
July 18, 2016
It looks so much better in real life than I imagined. A wonderful place for purifying your heart and soul.
Reply