Lawang-East Lombok Regency isn’t nearly as popular among tourists as Central and West Regencies. True, Mount Rinjani is in the east, but that’s pretty much the only famous landmark on the island (at least in the northern areas). However, there’s a lot of “talent” in that part of Lombok and today I want to introduce to you Gili Lawang – a lovely island that you’ll find just off the north-eastern shore.

It is located right next to Gili Sulat, another wonderful tiny piece of land, and together, they will make sure you have a nice time on the next trip. As you’ve already guessed, the only way to get there is by using a boat – you can rent one at the nearest Lombok Beaches.

Or, pay for a tour and let the local fishermen show you around. Both Gili Lawang and Sulat are under the protection of the Indonesian government. They do everything in their power to protect the marine life in that area, which means you’ll see lots of amazing fish and other underwater creatures when you do some snorkeling.

In fact, the water activities, including swimming, diving, and snorkeling are some of the main attractions of these spots. Along with the fish, this conservation area is also famous for the breath-taking coral reefs, the sandy beaches, and, of course, the mangrove forests. Yes, there’s a lot to see in Gili Lawang, and we’ll talk about it all in more details right now.

What Is Gili Lawang All About?

So, as we just learned, there’s enough to do on this island (and the neighboring Sulat). You can also rent a boat to do some sightseeing while sailing, bathe in the sun and camp out. For camping, I would highly recommend visiting the spot with your friends, because, on your own, it’s almost impossible to recreate that magical atmosphere of getting together around the fire and cracking jokes.

Renting is cheap, just like anything else in Lombok. For sunbathing in Gili Lawang don’t forget to grab your favorite glasses, sun cream, and hat. Without that “equipment”, you can very well get sunburns – they are quite nasty and hurt for days.

Important note: make sure to prioritize and schedule your trip so that you don’t miss anything interesting. I know that sounds like a lot of work, and you’re here to have some fun, but chaotic movements have never helped anyone. My recommendation would be to sail around in that boat for hours and then have a nice meal at the beach.

Save camping in Gili Lawang for later, when the sun goes down and it becomes a bit colder. The mangrove forest is fascinating, no doubt there, but I’m a big fan of water activities and snorkeling always comes first for me. See, now I’ve got my priorities straight! Follow my lead and your time on this island will be epic!

Both Gili Lawang and Sulat are covered by mangrove vegetation. If you’ve never been to a place like that before, I promise you’ll be deeply impressed. The trees are tall and have strong roots that reach the bottom of the ocean. Fact: for the tourists that can’t handle high humidity levels, this trip might not be a good idea.

The rest of us will get to enjoy the unusual fauna while walking up and down those bridges. There’s actually very little ground (soil) in Gili Lawang and, as I just said, most trees take roots in the water. Take a moment to appreciate the beautiful nature and give kudos to Lombok officials for keeping everything nice and clean.

Even though the place looks exactly like it used to centuries ago, it’s obvious that the locals are taking care of it; without some proper “handling”, the bridges would’ve been consumed by those trees and plants a long time ago. The local monkeys, bats, and birds will give you a warm welcome: this has been their home for many decades.

So, try not to disturb their peace. The birds will chirp at you on every step of the way, though; take out your phone/camera and take some pictures. I’ve managed to capture some wonderful moments. The fans of tropical ecosystems will definitely appreciate what Gili Lawang has to offer.

Overall, there are 7 species of seagrass and several tree species, meaning the tourists that love to learn more about the beautiful nature of Lombok will end up spending days there. Information for the snorkels: it will take you approximately 4 meters to reach the underwater life in the shallow waters.

The water is as clear as daylight, and you might even be able to see the fish while standing on the bridge. Because of the fact that the humans haven’t touched this area at all, the fish isn’t afraid to “hang around” near Gili Lawang. During the dry season, the tourists might be able to see some migrating dolphins – that’s a sight for sore eyes.

I said earlier that swimming, diving, and snorkeling are the most popular water activities here. Sadly, surfing is not possible, as the highest waves only reach 1 meter in height. Information for the fans of swimming: the average temperature of the sea surface is 29 degrees Celsius. During the May-November period, it usually becomes warmer.

At the same time, during the February-August period, the water gets colder. Keep that in mind when planning your trip to Gili Lawang. The rest is easy and the foreigners are free to visit East Lombok Regency whenever they please. It’s almost always sunny and warm there.

Some General Tips For The Tourists

Summing up, I want to say that for eco-tourism, both Sulat and Lawang are great. The underwater life, along with the lush forests will linger on long after you leave Lombok. The best snorkeling spot is right between the two islands. The corals there are beautiful, as are the fish. The only downside is that there aren’t any public facilities there.

No hotels, restaurants, or even warungs and food stalls. So, if you’re planning on staying in Gili Lawang for longer than a couple of hours, that bag of yours needs to be stuffed with drinks, snacks, repellent, towels, and dry clothes. Or, just have a nice meal in Lombok and enjoy a weightless trip to your destination.

As we already learned, this is one of the most “versatile” parts of Lombok and will satisfy a wide range of tourists. For being one-on-one with Mother Nature and having the best time of your life without the locals and the foreigners getting in your way, Gili Lawang is one of the best spots in Lombok.

You’ll get to ride on a boat, go deep under the water to check out the fish and the corals, walk the bridges among the beautiful, almost futuristic trees, and even camp out at the beach. What could be better than doing all those things on a tropical island and still protecting the “dignity” of your wallet?

How To Find Gili Lawang

The island is located in north-eastern Lombok, several kilometers to the right. The foreigners that landed at the Lombok International Airport should just head that way without any detours, as the road will be quite long (approximately 2 hours and 30 minutes). Riding along the south-eastern coast, you’ll see Sumbawa on the right, along with numerous beaches with white sand and turquoise water.

Renting a taxi is the most popular thing to do, as long flights along with long rides behind the wheel tend to wear a person out and then you simply won’t be able to enjoy Gili Lawang to the fullest. Or, use public transportation to get there.

But remember: public buses don’t usually leave until they’re full, and you’ll need to make several stops before reaching the island. From the Kuta beach, the route will be the same but a bit longer (up to three hours). From Mataram, there are three routes at your disposal.

The first one lies along West Lombok Regency and you’ll get to see the famous beaches, including Senggigi. The second one is through the center of the city (and the island) and is relatively straightforward. Finally, there’s another route – through the southern suburbs. The shortest one is through the city, but it might be overcrowded. 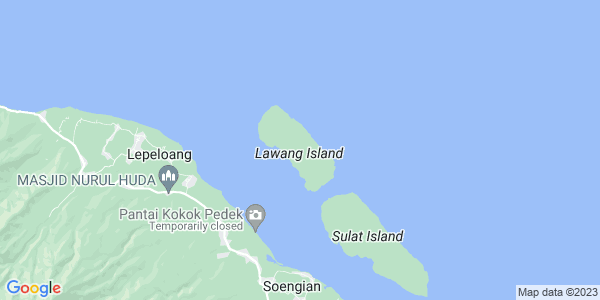 Selena B.
February 10, 2018
I've never even heard about this Gili, but as it turns out, it's exactly what I've been looking for!
Reply
Trey F.
May 7, 2017
For a short yet exciting adventure, Gili Lawang is perfect. Just don't expect too much from it.
Reply
Giuliana E.
December 24, 2016
If you want to do as much sightseeing as possible, take the western route to get there and return using the eastern route.
Reply
Maddison T.
August 8, 2016
They don't always have snorkeling gear available at the closest beaches; so, make sure to bring your own.
Reply
Ruben H.
June 4, 2015
Both Sulat and Lawang are amazing for connecting with nature. These are some of the most "primal" islands in Lombok.
Reply