East Lombok is a very special place. It’s one of those spots that are capable of impressing even the most demanding tourists. There are landmarks on literally every step of the way, and if you take some time to learn more about the temples, beaches, and waterfalls, your trip will become even more insightful and exciting.

The Bilok Petung village is pretty big (for Lombok, anyway) and is home to some of the best folks I’ve ever met. The entire place is covered in trees and rocks, making it a challenge to get from point A to point B. Today we’ll talk about Mayang Putek, a very beautiful and mysterious waterfall that the locals call sacred.

I’ve talked to some of the villagers and they told me all kinds of crazy stories. This island is full of falls; so, why should you spend your time, energy, and money on checking this one out? Because it’s quite unique: the water flowing down from Mount Rinjani comes with sulfur, and the citizens of Lombok believe that it’s capable of healing our diseases.

Obviously, that’s just some silly story, but I’d still give it a try. Who knows, maybe the ancient gods of this island will smile upon you? Again, the Mayang Putek Waterfall comes directly from the 2nd-tallest mountain in Indonesia and is approximately sixty meters tall. Yes, it’s a gigantic fall!

What Is The Mayang Putek Waterfall All About?

I’ve been to many resort towns/islands and have seen more landmarks than I can even remember. Still, this work of nature managed to impress me. As I already said, there’s something magical about that village. Every single spot there is tied to a legend that has been around for many decades, if not centuries.

Same goes for this fall. Back in the day, a beautiful white stag was seen “hanging around” at this location, drinking the water and bathing. So, that is why the locals decided to call it “Mayang Putek”, which literally means a white stag. Yes, Indonesians aren’t really big on coming up with crazy names and prefer to use simple, descriptive words.

Is the stag considered to be a sacred animal? Of course, it is – that’s how it goes in Lombok. I highly encourage you not to rush yourself on this trip and take some time to look around. Nature is very beautiful in Bilok Petung and it gives the foreigners an opportunity to learn more about the Sasak people and their culture.

Located at the border of the northern and eastern parts of the island, it’s definitely worth a visit. Spots like this one are best to be enjoyed with your friends/loved ones. On the other hand, if you’re a loner and prefer to explore new places on your own, Mayang Putek will open itself up to you from an entirely different angle.

Learning More About The Place

Depending on the time of the year, the temperature of the water can range from freezing to warm and comfortable for swimming. Even if it’s cold, try to take a couple of quick dives to “freshen up” and gather your strength for a new adventure. Sadly, there aren’t any cafes, restaurants, or even food stalls in the area, which means you’ll have to take some food and drinks with you before heading for the Mayang Putek waterfall.

No hotels or guest houses either. However, if you plan everything right, you’ll be able to check several landmarks in the village and still make it back to your hotel in, say, Mataram, before it gets darker and colder.

I have to also say that there aren’t any public facilities like a bathroom or anything like that. No mosques, no temples – nothing. It’s safe to say that this is one of the least popular places in Lombok because of the rough terrain and the lack of any infrastructure. And while this could lead to some inconveniences, especially for the 1st-time travelers, for the people that appreciate raw, “unfiltered” nature, it will become a favorite spot.

Make sure to grab enough batteries for your phone and camera so that you can take as many pictures and selfies as needed. There’s nothing worse than finding just the right angle only to learn that the device is out of power!

What Is There To Do At This Waterfall?

So, we’ve already learned that there aren’t any public facilities in the area; same goes for the restaurants and hotels. You will find something tasty to eat and maybe even a room to spend the night in the village. However, you shouldn’t rely on Bilok Petung, as it might disappoint you. Apart from admiring Mayang Putek, and other waterfalls, there’s not much to do there.

Swimming, taking pictures, and listening to ancient legends – that’s pretty much it. You won’t really need any sun cream or any other protection, but do wear some light clothes. Even though the temperature near waterfalls is usually lower than anywhere else, the temperature will still be high.

A quick tip: it’s only 30-40 minutes away from Sendang Gile. There, you’ll find not only food stalls but also restaurants and some convenience stores that sell anything from a pair of gloves to a cheap-yet-tasty rice meal. There are also some hotels and trekking centers there, which means you’ll be able to get directions from the locals.

Most tourists prefer to check out Mount Rinjani after they visit Sendang Gile and Tiu Kelep, and that is why Mayang Putek is often half-empty. So, it’s up to you to pick between following the crowd and climbing that mountain or choosing a different route and enjoying solitude with the “magical waterfall.”

How To Get The Mayang Putek?

As you might already know, I’m not a big fan of guides, as they usually try to rip the foreigners off and don’t really seem to be doing much work. And while the road to this waterfall is a challenging one, that doesn’t mean you won’t be able to get to the destination without the help of a professional.

With that said, get ready for a 30-minute-long journey that’s going up, then down, then through a hill and across a beautiful river. Furthermore, the road back will be even harder and slippery if it starts to rain. Again, it’s not always fun to travel to places like that alone. If there’s a big, noisy crowd with you, the entire trip to Mayang Putek will be a lot more fun.

But, in all fairness, it will be all worth it regardless of whether you’re on your own or not, because the wonderful waterfall looks great, and the perspective of having the best bath in your life in that sulfur-rich water should be good enough. When I got there, the place was pretty much empty; yet, while I was taking pictures and enjoying my snacks, a couple of locals joined me in admiring the landmark.

It’s a known fact that some of the best spots in Lombok are hidden from the average tourist’s eyes simply because they are not popular. And I’m happy to tell you guys about them so that more and more people will get an opportunity to visit the other side of the island.

How To Find The Mayang Putek Waterfall?

If you’re at the Senggigi Beach right now, sipping a cold drink or conquering the steep waves, the ride to Mayang Putek will take approximately 2 hours and 30 minutes. I’m talking about the shortest route that lies across the north-western part of Lombok. You’ll be driving along the coastline that’s covered with beautiful beaches and the fantastic ocean.

On a bike, the ride will become one of the highlights of your entire trip. From Mataram, you’ll embark on the same route and spend probably 3 hours on getting there. And if you’re at the Lombok Airport, the road will take you through the eastern part of the island, which is also quite beautiful.

Mayang Putek is located in the north-eastern corner, right next to the shore. The exact address is Bilok Petung, Sembalun, East Lombok Regency. The ride from the airport to the spot will also take +/- 2 hours and 30 minutes. As always, the foreigners have to choose between renting a car/bike, hiring a taxi driver and using public transportation.

Renting is the most fun option. A taxi is more expensive but also allows you to relax in the back seat. Public buses are usually slow and full of passengers – no fun at all. Pick your route and means of transportation wisely so that you can enjoy Mayang Putek to the fullest! 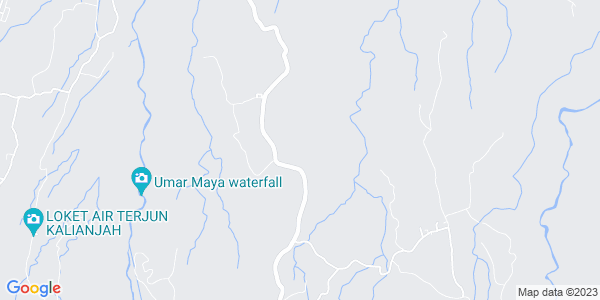 Cassidy Y.
March 1, 2018
The road up there is not a walk in the park, that's for sure. Then again, once you reach the top, satisfaction is guaranteed.
Reply
Kyla D.
July 15, 2017
What can I say - this place impressed me even more than Tiu Kelep and Sendang Gile.
Reply
Johnny X.
December 15, 2016
If you like lonely spots as much as I do, the entire village will take your breath away with the beautiful views.
Reply
Veronica J.
March 22, 2016
Sulfur makes the water look white, and it's pretty cool. I wouldn't recommend drinking it, though.
Reply
Jasper A.
February 10, 2015
You're right about one thing: there is something magical about this waterfall. The visit will definitely linger on.
Reply