Lombok is pretty tiny compared to the rest of the country (Indonesia), but, along with Bali, its neighbor, this is one of the most popular islands in the world. The climate is awesome, the locals are friendly, and there are more landmarks than you could even imagine. In this post, we’ll talk about Waterfall Yarn Nets, another wonderful waterfall for you to enjoy.

It might be confusing at first, as the entire island is covered in them and it could be a bit tricky to set them apart. Located in the Aik Berik village, it’s a sight for sore eyes, that’s for sure. It’s safe to say that nature surrounding the majestic Mount Rinjani is always worth a visit.

Most of the waterfalls on the island originated thanks to that mountain and they give life to the forests and the creatures living in them (including the humans). So, what about Waterfall Yarn Nets? First of all, you gotta know that it’s very close to Benang Kelambu, another incredibly beautiful waterfall, and is located in the Central Lombok Regency.

However, it needs to be said that they’re actually pretty far away from each other in real life (even though they do seem to be close on the map). Besides, do keep in mind that the terrain there is challenging and it might not be that easy to overcome that distance. But, according to the experienced tourists, it is one of the finest places on this island.

What Is Waterfall Yarn Nets All About?

Someone once told me that when you enter the Rinjani National Park, you end up in the kingdom of hot springs and waterfalls. Today, after being a tourist myself for so many years, I can confirm that. Now, the water in Waterfall Yearn Nets in flowing directly from the top of Rinjani. The locals claim that it’s magical and can heal most of your diseases in the blink of an eye.

That is exactly why both the citizens of the island and the foreigners prefer to take long baths in the pond of the waterfall. If you wash your hand with that water, you will forever stay young. Don’t quote me on that, though, as it’s just an ancient legend that some people want to believe in.

If you decide to climb the rocks in the area, be super careful, as they are slippery and you might end up hurting yourself. The greatest thing about this place is that nature is unspoiled and it makes the tourists feel like they’re in the middle of a tropical island that hasn’t been touched by human hands for centuries. In a way, that’s exactly right.

While the rest of Lombok is slowly, but steadily moving forward in terms of technology, these parts are still “virgins”, which is why they are so popular. Again, Waterfall Yarn Nets is only as good as its surroundings. The lush forest is full of birds and monkeys (the black ones) and you gotta watch your step, especially after it rains.

When walking through the forest, you’ll see that the valley is getting steeper the closer you get to the destination. Up there, the air is fresh and full of life, which is totally normal since the waterfall is located right in the middle of the “greenest” part. The path is challenging, but I can assure you that no guide will be needed on this journey.

Besides, the local trekkers are known for their greed and tricky moves. Obviously, not all of them are bad, but there’s nothing worse than paying a huge amount of money (for Indonesia, anyway) and learning later that they were just a bunch of fraudsters. You can reach Waterfall Yarn Nets on your own, just like I did.

Unfortunately, aside from the local folks, this landmark is only known to a select group of foreigners, and that’s a pity because places like this one deserve to be recognized. On the other hand, the fans of solitude and tranquility will appreciate the fact that they can be all alone with the waterfall and never worry about others messing up their mojo.

The path to Yarn Nets is paved; sadly, it is getting worse with every year, not to mention the road before that leaves a lot to be desired. The paddy fields along the road look pretty cool; once you get really close, the coffee plantations will welcome you with a wonderful fresh smell. Too bad you can’t drink any of it!

Just like Kelambu that I mentioned in the beginning, this waterfall carries the “healing” waters of the Segara Anak Lake. Furthermore, it’s flowing through a huge number of plants that grow on the side of the mountain. The pictures can’t really make you feel even the half of what you’ll feel standing in front of this beauty.

The whole thing looks like a gigantic building with the plants forming some sorts of windows, making frames for Waterfall Yarn Nets. In this regard, these two are very similar to each other. Still, they both deserve a visit, as the experiences will be pretty different. Yarn Nets consists of two levels: the water flows into a pond first and only then reaches the ground.

With a height of 35 meters, it’s quite a titan. Because of this fact, you can stand right under the water flow: the plants make it slow down. Please remember that other waterfalls that hit the floor without any obstacles can be quite hurtful. When you’re standing in the middle of the level one pond, it feels like the fall is washing all of your troubles away.

For the tourists, this is a perfect place to swim, mess around, and connect with nature. The air is pure, the water is nice and warm, and the birds/animals create just the right atmosphere for you to enjoy.

Some Tips Before Your Visit

As we learned today, the National Rinjani Park and pretty much the entire Central Lombok is covered in waterfalls. They are literally on every step of the way, and Waterfall Yarn Nets is one of the most beautiful ones. If Tiu Kelep and Sendang Gile can’t impress you anymore, this marvellous “treat” from nature will, without a doubt, bring a smile to your face.

Don’t forget to explore: even if the trip is only one week long, you can check most of the falls in the area in a day or two. I mentioned Kelambu earlier. Along with this piece of art, it is among the finest attractions on the island. Don’t rush it, though, and spend just enough time with each waterfall to get the most of it.

It would be a great idea to pack some snacks and drinks with you. Towels and some dry clothes are also super important, as you’ll definitely get wet around those falls. A mosquito repellent will save you a lot of nerves, not to mention protect your skin from their nasty bites. That’s pretty much it. Every waterfall is unique and wonderful in its own right.

Make sure to take at least a couple of pictures to remember this place by. I can say from personal experience that it’s always better to explore places like this one with a person you love. That way, it becomes a special spot on the map!

How To Find Waterfall Yarn Nets

I bet you’ve looked at the map in the lower corner of this article more than ones already. Well, don’t let the fact that it’s away from civilization scary you. True, you will have to drive through half of Lombok to get there from the International Airport; however, the ride won’t take more than 1 hour and 30 minutes.

Take the short, straight route (Jl. Bypass Bandara Int. Lombok, Jl. Raya Sengkol and Jl. Raya Mandalika/Jl. Raya Tuan H Guru Lopan towards Jl. Ahmad Yani) but keep in mind that during the holidays, traffic might be bad. As you get closer to Waterfall Yarn Nets you’ll see a couple of mosques standing on the hills.

Now, most people think that you need to go through the western shore of the island (yes, where the Senggigi Beach is) to reach this spot, but that’s not really true. Tiu Kelep and its sibling are on the other side of the mountain; the National Park is also pretty far away. From Mataram, the road is just as long as from the Airport and will take roughly the same amount of time.

Given the fact that Lombok has a population of over 3 million people and more landmarks than you can ever count, it’s pretty awesome to know that you can get from one corner to the other in about 2 to 3 hours. My advice to you: rent a bike and ride around like a boss! 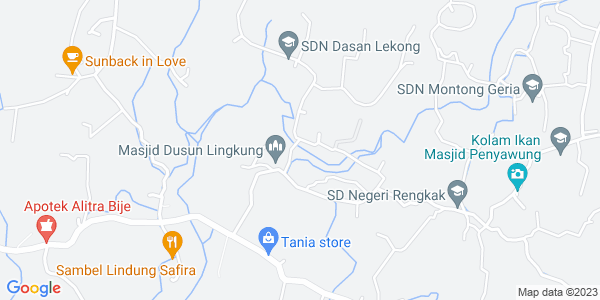 Rafael R.
June 12, 2018
I hate when the locals try to rob you of your bucks. Always makes me want to punch someone! But, in all fairness, everything is still cheap in Lombok.
Reply
Dalton K.
August 22, 2017
Trekking might be a bit challenging even for the athletic tourists. So, don't forget to make frequent stops.
Reply
Emerson A.
July 24, 2017
Brilliant - that's probably the best word to describe this waterfall. I'm not a big fan, actually, but this one stole my breath away!
Reply
Andy N.
January 4, 2016
I used to only know about Sendang Gile, but now, thanks to your article, I've learned about Waterfall Yarn Nets.
Reply
Sierra E.
November 21, 2015
As always in Lombok, the roads are bumpy and in a bad condition. But the paved part is ok. Watch out for those slippery rocks, though.
Reply